The Amulet of Morgan le Fay 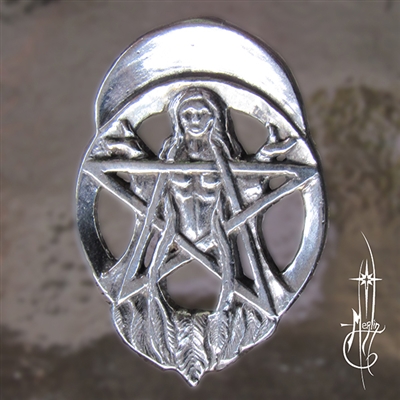 A classic figure from Celtic Lore. Her Origins are vague and encompass many different figures which include the Arthurian legends of a sorceress, protector, healer and spiritual sister of King Arthur. In some versions of Her story She has been elevated to Queen of the Fairies and even Goddess.

For this version Morgan is placed in the Pentacle representing the elements where she offers her Blessings. Below are the feathers of the Raven: the bird who watches and often bring omens.  She is Crowned with a crescent Moon.

This amulet is heavy for it’s size: 1.25” tall with a bail behind the crescent moon so the amulet on a chain or cord appears to be “floating”.

Originally this amulet was commissioned by a client who wanted her vision of Morgan le Fay depicted as an amulet. This has been reproduced with her permission.

To get your Amulet of Morgan le Fay, please visit Her page in my website
If you are wanting something of your own design, please visit my “How to order custom” page.